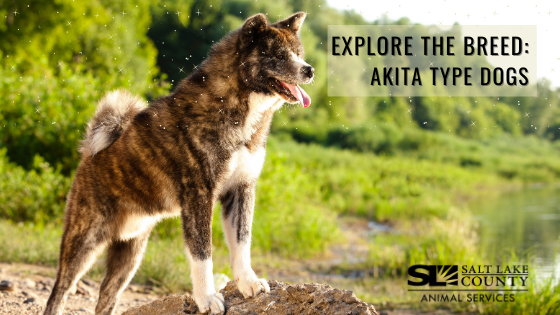 The Akita is a large breed of dog that originates from the mountainous regions of northern Japan. There are two types of Akita's. The Japanese strain known as the Akita Inu and the American known as Akita or American Akita, they have also been referred to as the Snow Country dog and the Great Japanese dog. The Japanese Akita Inu has a very narrow margin of colors while the American comes in all dog colors. The Akita's coat can be any color but often it is white, brindle or pinto. American Akita's generally are heavier boned and larger, with a more bear-like head. Japanese Akita's tend to be lighter and more finely featured with a foxlike head.

What Does an Akita Need?

Akita's are intelligent, stubborn, and courageous. They do not often back down from a challenge or frighten easily so it is very important for them to be well socialized with people and dogs from birth.

The Akita is a very loyal dog who is attached to its family. They are loving and protective of their families and even have a very silly and affectionate side with family and friends. They tend to be wary of strangers and can often be intolerant of other animals. They thrive on human companionship. They are hardwired to protect those they love.

They have moderate energy levels. While they need daily exercise and mental stimulation it does not need to be lengthy to get rid of excess energy, they can go on several brisk walks a day along with a few play sessions in the yard. While they are an athletic breed they can run out of energy and like to kick back.  They are happiest living in doors with their families and are not prone to barking, they can even be a good dog for someone living in an apartment if they are being given the opportunity for daily exercise and mental stimulation. While the Akita's coat is very hearty they should not be left outside for long periods of time whatever the weather (hot or cold). Akita's do not often manage alone time well and can become easily bored and develop destructive behaviors such as chewing. They are known to love the snow and enjoy having time to play in it.

Akita's require about 3-5 cups of a low calorie, high quality food daily split between two meals so they do not grow too fast. They have a thick double coat. It is a stiff, straight outer coat with a soft thick undercoat. They do shed at a high rate and will shed excessively about twice a year when they “blow their coat.” Weekly brushing will keep the coat healthy and decrease shedding. Brushing should be done more frequently during peak shedding seasons Spring and Fall. Akita's also can be known to drool, it is not a common trait but a possible one. They groom themselves like a cat, are clean and house training is not usually a problem.

Akitas are generally healthy but they can be prone to hypothyroidism, hip and elbow dysplasia, and progressive retinal atrophy.

Origins of the Akita:

The Akita originated in the snowy and rural lands of Akita and Odate, which are mountainous regions of Japan. They were trained to hunt elk, wild boar and Ussuri brown bears. During the 1600s, sadly, they were used for dog fighting. At that time, it was a popular sport in Japan.

The Akita served as companions for Samurai from the 1500s-1800s. During the 20th century Akita's were used during the Russo-Japanese War to track prisoners of war and lost sailors, some were used as scouts and others as guard dogs. They were also used in World War II and crossed with German Shepard’s to save them from a government order for all non-military dogs to be culled.  World War II almost pushed the Akita to the brink of extinction. They lacked nutritious food, and many were killed to be eaten by a starving humans. Akita pelts were used as clothing. The government ordered all remaining dogs to be killed on sight to prevent the spread of disease and the only way that owners could save their Akita's was to turn them loose in remote mountain areas were they were able to breed back their ancestor dogs.  Because of the cross breeding with the German Shepard, St. Bernard and Mastiff the Akita was in decline. They began to lose their Spitz characteristics and took on a look of drop ears, straight tails, loose skin, and a non-Japanese color (IE: black masks, and any color other than white, red, and brindle).  To restore the Akita breed a modern Japanese breed known as the Matagi and a Hokkaido Inu breed were used to mix back in the Spitz characteristics and restore the Akita breed. A man named Morie Sawataishi and his efforts to breed the Akita is a major reason why the Akita breed exists today.

The Japanese Akita has few genes from the western dogs and Spitz characteristics from the reconstruction of the breed taking place. The American breed of the Akita descends from the mixed Akita before the restoration of the breed and are typically mixed and not considered true Akita by Japanese standards.

FUN FACT: Akita's have webbed toes to help them walk on snow and distribute their weight more effectively.

FUN FACT: There is a tradition in Japan, that when a child is born, they receive a statue of an Akita. This statue symbolizes health, happiness, and a long life

FUN FACT: The story of Hachiko, the most revered Akita of all time, helped push the Akita into the international dog world and there is a bronze statue in the Shibuya train station in his honor. Every year on April 8th since 1936, Hachiko’s devotion to his master has been honored with a ceremony of remembrance at the Tokyo Shibuya railroad station.

FUN FACT: Helen Keeler is credited with bringing the Akita to America after being gifted two Akita's by the Japanese Government in 1938 after inquiring about Hachiko while on a visit to Japan.

FUN FACT: In 1931, the Akita was officially declared a Japanese National Monument.  In 1934 the first Japanese breed standard for the Akita Inu was listed and in 1967, commemorating the 50th anniversary of the founding of the Akita Dog Preservation Society, the Akita Dog Museum was built to house information, documents, and photos.

If you are interested in learning more about our adoptable animals please email adoptions@slco.org.