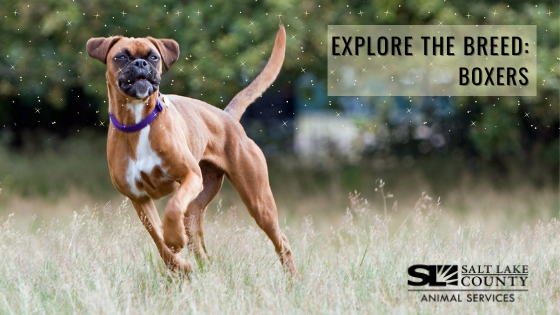 The Boxer is a medium to large breed of dog with a short, shiny coat that requires very little grooming and tends to be a clean dog. The colors of their coat are fawn, red fawn, brindled, reverse brindle or white with and without markings.  20-25% of all Boxers are born white. White Boxers have a higher risk of sunburn and associated skin cancers and the piebald gene, which is responsible for the white markings in Boxers, is linked to congenital sensorineural deafness in dogs. It is estimated that 18% of white Boxers are deaf in one or both ears. Boxers have a square muzzle, and a very strong jaw with an underbite.

Boxers are known for their loyalty, intelligence, affection, and work ethic. They are smart, curious, energetic, courageous, playful, and sometimes silly. They have a protective nature and take the role of family guardian seriously and have been known to do well with children. but can be distrustful of strangers. They are known to be headstrong if they are not trained properly and can be patient with smaller dogs and puppies but can have difficulties with larger adult dogs, especially those of the same sex if not properly socialized in puppyhood. They are very patient and are great to adopt as family dogs.

Boxers are playful, high-energy dogs that need ample exercise daily. They are very intelligent and can become bored with repetition. Boxers excel in canine sports such as agility, herding, flyball and obedience training and would do best with an active home that will provide adequate exercise to prevent boredom-associated behaviors like chewing or digging. Like all dogs it is important to expose them to lots of people and other animals early on.

Boxers can do well in an apartment if they are adequately exercised. They are temperature sensitive and can easily get overheated or cold very quickly.

Because of their need for plenty of exercise their diet should be high in quality calories, and they would do well with a high-quality food. However, some dogs are prone to becoming overweight, so watch their calorie consumption and weight level. While treats can be very helpful as a training aid giving to many could lead to obesity. Owners should be mindful of the food to treat ratio consumed.

The Boxers shorthaired and smooth coat is easy to groom. Bathe them when necessary and brush with a firm bristle type brush. They are average shedders.

Females are typically 21-24 inches in height and will weigh between 55-70 lbs.

Their life span is between 9-15 years of age

Boxers are prone to cancer (specifically mast cell tumors), Arthritis, hip dysplasia, back and knee issues, cardiomyopathy, and other heart problems and sometimes prone to epilepsy.

The Boxer is a hunting mastiff developed in Germany in the late 19th century. The Boxers ancestors were two German mastiff type dogs, the Bullenbeisser and the Barenbeizer. The Bullenbeisser had been a hunting dog for centuries and would hunt bear, wild boar and deer, its job was to catch the prey and hold it until the hunters arrived. In later years, faster dogs became favored, so a smaller Bullenbeisser was bred and the Brabanter Bullenbeisser now an extinct breed is generally accepted as being the direct ancestor of today’s Boxer.

In 1894, three Germans decided to stabilize the breed and put on an exhibition dog show, this was done in 1896 and the year before they founded the first Boxer Club, called the Deutsher Boxer Club. This club published the first breed standard in 1904.

The Boxer was introduced to other parts of Europe in the late 19th century and the United States at the turn of the 20th century. The AKC (American Kennel Club) registered the first Boxer in 1904. During World War I, the Boxer was used for military work as a messenger dog, pack carrier, attack dog and a guard dog. They did not become popular until after World War II when returning soldiers began taking them home and they became introduced to a wider audience.

Since that time, they have been used as service dogs, guide dogs for the blind, therapy dogs, police dogs in K9 units and occasionally herding cattle or sheep.

Because of their origins as a hunting dog, they can have a high prey drive for smaller animals if not properly socialized.

The Boxer is thought to have been given its name supposedly from the breeds tendency to play by standing on its hind legs and “boxing” with its front paws.

Fun Fact: The Boxer does not carry the gene for a solid black coat color, so purebred black Boxers do not exist

Fun Fact: Boxers have excelled in dog shows and won Best in Show at Westminster 4 times.

Fun Fact: Brandy the Boxer is a Guinness World Record Holder for the longest tongue on a dog. Her tongue was a record length of 17 inches (43 -cm)

Fun Fact: Macabee is the oldest known Boxer to have ever lived. He was just a few months short of his birthday when he passed. He was 16 year and 9 months.