Javascript is required to view this site. Skip to main content
Emergency: All services at Salt Lake County Animal Services are available by appointment only. Call/Email animal@slco.org/385-468-7387, to make an appointment for: Lost Pet Walk-Thru, Adoptions, Vaccinations & Volunteering. Masks are required regardless of vaccination status. 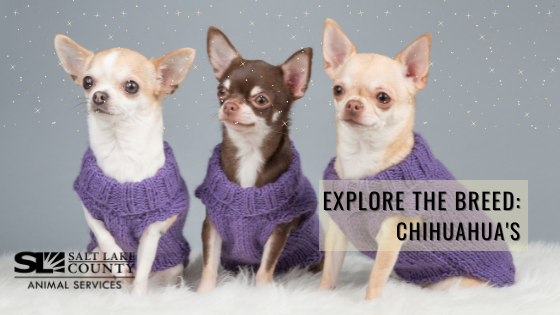 The Chihuahua is a tiny dog with a huge personality. They are a national symbol of Mexico and among the oldest breed of the Americas, they have lineage going back to the ancient kingdoms of pre-Columbian times and is named after the Mexican state of Chihuahua. Check out our adoptable Chihuahua's at Salt Lake County Animal Services.

There are two varieties of Chihuahua, Smooth Coat and the Long Coat, and they can come in many colors and patterns including black and tan, fawn, chocolate, white, blue and red. Both smooth and long coats are equally easy to keep clean and well groomed. Smooth coat ranges from having a velvet touch to a whiskery feel. Longhaired Chihuahuas are smoother to the touch and have fine-guard hairs and a downy undercoat, this gives them their fluffy appearance.  Unlike many long-haired breeds, longhaired Chihuahuas require no trimming and minimal grooming. They should have their coat brushed once a week to avoid tangling or mats. The longhair typically sheds less than shorthaired Chihuahuas. It can take up to three years before a longhaired coat develops.

Chihuahuas heads can also vary: They can either have a rounder apple head or a deer-shaped head, which is narrower with a longer snout. They weigh anywhere from 3-6 pounds making them great city apartment dogs.

Chihuahuas love their people but typically bond to an individual person, often they are lapdogs with their person through and through. They are known to be excellent watchdogs due to their terrier like bold personality and that they are often suspicious of strangers. They are great at alerting you if something is amiss around your house and while they can be family dogs if properly socialized and handled well by children, they do best in an adult household.

Chihuahuas are charming, sassy, and smart. They are small but have big personalities. They are often easy to train, easy to groom, prone to health issues, good for first time pet owners, and have strong loyal tendencies. They are busy and like to be close to their owners and are often underfoot. They as with any dog, need to be properly socialized from a young age.

Chihuahuas are typically easy to care for requiring little grooming, but it is recommended that they have their teeth brushed regularly and their nails trimmed.

They can get cold very easily and do not tolerate cold weather well. They do not mind being dressed up in a sweater or coat, they are often tiny fashionistas and are commonly referred to as “purse dogs”.

Chihuahuas need about 20-30 minutes of exercise daily. This can include walks, toy time, running around in the yard. They are known to go-go-go so it is important to make sure they do not tire themselves out too much especially in hot weather.

Chihuahuas are fast learners and can compete in agility and obedience trials with just as much success and enthusiasm as a large breed dog.

It is important that they are provided high quality food in proper amounts for their age as they are prone to becoming overweight.

Origins of the Chihuahua

The Chihuahua's origin isn't 100% clear, there are two main theories that exist. One says Chihuahuas descended from a Central or South American dog known as the Techihi, a larger version of the Chi dating back to the 9th century and the Toltec civilization. The Aztecs conquered the Toltecs, who then made techichi prominent in their society. They believed the dogs had mystic powers—and had the ability to see the future, heal the sick, and safely guide the souls of the dead to the underworld.

The Spanish conquered the Aztecs in the late 1500s, and the techichi faded into obscurity. The dogs lived in remote villages, and when they were discovered by Americans visiting Mexico in the mid-1800s they were found mostly in the State of Chihuahua, gaining the name “Chihuahua”.

The second theory is that small hairless dogs from China were brought to Mexico by Spanish traders and then bred with small native dogs. These are the origins of short-haired Chihuahuas; the longhaired variety was probably created through crosses with papillons or Pomeranians.

The first American Kennel Club-registered Chihuahua, Beppie, was recorded in 1908. Chis gained popularity as pets during the 1930s, 1940s, and 1950s—with help from famed musician and bandleader Xavier Cugat, who famously waved his baton with one hand while he held a Chihuahua in the other.

FUN FACT: Relative to their bodies, Chihuahuas have the biggest brain in the dog world.

FUN FACT: Remember the Taco Bell Dog? A Chihuahua named Gidget made the phrase “¡Yo quiero Taco Bell!" unforgettable during the 1990s.

FUN FACT: The world’s smallest dog, Brandy is a Chihuahua measuring just 6 inches from her nose to the tip of her tail.

FUN FACT: Like human babies, chihuahuas have a soft spot on their heads called molera. But unlike babies, a chihuahua might have the spot for its whole life.

FUN FACT: A feral pack took over and terrorized an Arizona town in 2014.