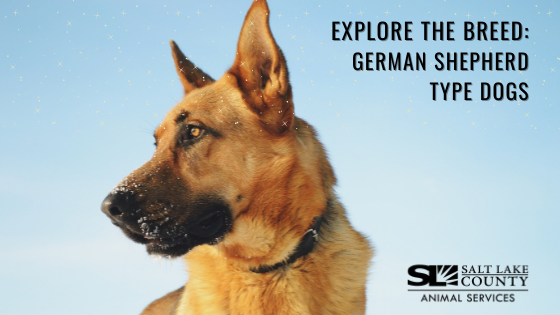 At Salt Lake County Animal Services, we often see a variety of German Shepherd type dogs. You can see the available dogs on the adoptable pet’s page. For further information about an adoptable dog, please email adoptions@slco.org.

The German Shepherd is a medium to large sized working dog that originated in Germany in 1899 making it a relatively modern breed of dog. The breed was originally known as the “Alsatian Wolf Dog” in the UK from after the first world war until 1977 when its name was changed back to German Shepherd.

German Shepherds were developed originally as a working/herding dog for herding sheep. However, because of their intelligence, trainability, strength, and obedience they have become the preferred breed of dog around the world for many types of work. They are often trained to work in search and rescue, as police dogs, disability assistants and hold acting roles in the military.

There are variants of Shepherds, that are a variety of the German Shepherd.

The East-European Shepherd: bred in the former Soviet Union with the purpose of creating a larger and cold resistant version of the German Shepherd. This is one of Russia’s most popular types of dogs and lacks the physical deformities bred into the western show lines of German Shepherds.

King Shepherd: a variety of German Shepherd bred in the United States. The breeders of the King Shepherd did so in hopes of rectifying the physical deformities that have been bred into the original breed.

Shiloh Shepherd: Developed in the 1970’s and 80’s to correct behavioral and conformational issues bred into modern German Shepherds. Bred for Large size, length of back, temperament and better hips.

White Shepherd: Bred in the United States specifically for their coloration. This variety is recognized as a separate breed by the UKC.

German Shepherds are Loyal, diligent, and highly intelligent. They are often trained in workforce jobs because of their ability to learn commands, perform tasks and their willingness to defend loved ones.

German Shepherds can be good family dogs with proper training and socialization. They are ideal for an active household. They are known to be aloof around new people and may even be suspicious. Socialization with people and other animals is key in having a well-adjusted dog.

Because they are strong, agile, and often have a high energy level. Plenty of regular exercise is essential if you are going to own a German Shepherd. They need more than a daily walk. They need to run, play, have mental and physical stimulation to prevent boredom and pent-up energy. A dog that is bored will usually develop bad habits such as barking, digging, and chewing.

German Shepherds have coarse, sometimes wiry, medium length hair with thick undercoats. Their coats should be brushed every few days which can help to lessen their shedding. Their coat resists dirt and debris so they do not need to be bathed more than once a month. You do not want to bathe too often or it will strip the natural oil that keeps their coat healthy.

German Shepherds do best when fed two meals a day (up to 2 cups) this depends on size, activity level, age, and other factors of health. They are prone to bloating which can cause stomach torsion so providing 2 meals a day instead of one is best. It also is a good idea to have them eat out of a slow feeder or a maze bowl and have their food in a raised feeding station.

Common health problems to be aware of:

Origins of the German Shepherd:

The German Shepherd originated in Germany in the late 1800’s. They were bred to be responsible for herding sheep and protecting flocks from predators. They were not considered to be pets or companions but rather work dogs for farmers. Their intelligence, speed, strength, and keen sense of smell gave them the skills necessary for herding sheep, but they differed significantly both in appearance and ability from one locality to another. To help fix these differences the Phylax Society was formed in 1891 with the intention of creating a standardized dog breed but disbanded after 3 years due to ongoing internal conflict regarding the traits of the dogs and what the society should promote. Some believed that they should only be bred for working and others thought they should also be bred for appearance.

In 1899 Max von Stephanitz (an ex-member) was attending a dog show and was shown a dog named Hektor. Hektor was the product of generations of selective breeding and completely fulfilled what Von Stephanitz believed a working dog should be. He purchased him immediately, changed his name to Horan Von Grafrath and formed the “Society for German Shepard Dogs.” Horand was declared to be the first German Shepherd Dog and the first to be added to the society’s breed register.

Horand became the centre-point of the breeding programs and although he fathered many pups, Horands most successful was Hector Von Schwaben. Hector produced Beowulf, who later fathered 84 pups, mostly by being inbred with Hektor’s off-spring.  In the original German Shepherd studbook, “Zuchtbuch für Deutsche Schäferhunde” there are four Wolf Crosses. Beowulf’s progeny also was inbred, and it is from these pups that all German Shepherds draw a genetic link. It is believed the society accomplished its goal mostly due to Von Stephanitz’s strong, uncompromising leadership and he is therefore credited with being the creator of the German Shepherd Dog.

FUN FACT: German Shepherds are considered the Third Most Intelligent Breed in the World

FUN FACT: The First Dog to Aid the Blind Was a German Shepherd

FUN FACT: The German Shepherd is the second most registered breed by the AKC and the 7th by The Kennel Club in the UK.