Javascript is required to view this site. Skip to main content
Emergency: Mask are Required in this facility per Salt Lake County Health Department Orders. 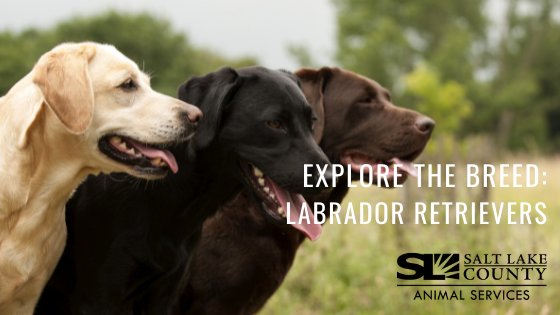 The Labrador Retriever is often abbreviated to Labrador or Lab and is one of the most popular dog breeds in several countries throughout the world. Labrador Retrievers are known for their obedience, loyalty, and playfulness. You may even find them available for adoption at Salt Lake County Animal Services.

The Labrador Retriever is a medium-large dog from the United Kingdom. They were developed from imported Canadian fishing dogs. They are referred to as gun dogs or bird dogs and are a type of hunting dog developed to assist hunters in finding and retrieving game. Usually quail, ducks, and doves. Gun dogs are divided into three primary types: retrievers, pointing breeds and flushing dogs.

Labradors are often trained as a disability assistant and aid those with blindness or autism, they act as therapy dogs. Law enforcement and other official agencies train them for detection and screening work.  They are prized as sporting and hunting dogs.

Labrador Retrievers are registered in three colors. Black (solid black) Yellow (from creamy white to a fox type red) and chocolate (medium to dark brown).  Some dogs are sold as silver purebred Labradors, but the purity of those bloodlines is disputed by breed experts and is believed to be a crossbreeding of a Weimaraner and a Labrador although this has not been conclusively proven.  Occasionally they will exhibit small amounts of white fur on their chest, paws, or tail.

Labradors are playful, even-tempered, loyal, and intelligent. They have a warm and friendly temperament that can make them ideal for a first-time owner and often are a great family dog. They have a good reputation with other animals and children of all ages.

Labradors are very energetic, curious, and love to explore and follow scents. They have a great sense of smell which helps them with hunting, tracking and detection.  They are highly intelligent and capable of intense single-mindedness and focus if motivated or their interest is caught. They are powerful swimmers and are known for their ability to tolerate cold waters for extended periods of time.

Do not mistake their easygoing personality for low energy; they are an enthusiastic athlete and require exercise. Labradors will do best with an active household that is willing to give them a good balance of mental and physical stimulation and require at least 2 hours of exercise daily. Labradors thrive in company, adore extra attention and playing games with their owners. If left alone it is important to make sure they have stimulating dog safe chew toys as many Labs are happiest when they have something to gnaw on.

Labradors have a short, dense, weather-resistant double coat, so they shed twice a year, typically during spring and before winter. Ideally, they should be brushed at least once a week to improve shedding and bathed once a month.

Labradors will do well on a high-quality dog food that is high in fat and protein and low in carbohydrates. They like to eat so they can become obese without proper exercise leading to health problems. It is best to feed them twice a day and keep a feeding schedule. How much you feed will be dependent on their weight.

Origins of the Labrador Retriever:

The Labrador Retriever dates to at least the 1830’s when St. John’s Water Dogs from Newfoundland were introduced to Britain from ships trading between Canada and Poole, England. These dogs were then bred with British hunting dogs to create what became known as the Labrador Retriever.

The Earl and Duke of Malmesbury used them in shooting sports and began to call them their “Labrador Dogs.” The name stuck, and the Earl’s son began breeding the dogs and by 1903, Labradors were recognized by the English Kennel Club. As the breed began to grow in popularity by the early 1900’s hunters and farmers from the United States had learned of the breed’s work ethic and began incorporating them into their daily lives.

FUN FACT: Labrador Retrievers were bred to be the perfect water dogs: They have water-resistant double coats that provide insulation, and their short fur keeps them warm but does not drag them down when it gets wet. Their webbed toes facilitate speedy swimming.

FUN FACT: Labrador retrievers are known for their ability to sprint. They can hit 12 mph in just three seconds.

FUN FACT: Regardless of the parents’ color, a single litter can include black, yellow, and chocolate puppies. There are two genes that cause the pigmentation of the coat, so the variation can be just as common as different hair colors in a human family.

FUN FACT: In 1981, a black Labrador mix named Bosco won the election to be the honorary mayor of Sunol, Calif., beating out two human candidates for the job. Bosco ran as a “Re’pup’lican” and used the slogan “A bone in every dish, a cat in every tree, and a fire hydrant on every corner.” Bosco remained the honorary mayor until he died in 1994.