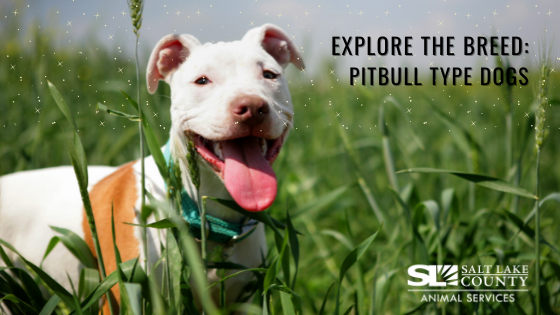 Pit Bull is a term that is used to describe a type of dog that is descended from bulldogs and terriers and has been used an “umbrella term” to give a general label to a few breeds of dogs with similar origins, appearance, and temperaments. This mislabeling can often have devastating consequences for dogs mistaken as a “Pitbull type” dogs who have landed in a shelter or a city with breed legislation. Often, they are just a random mixed breed of dog.

There are 4 Pitbull type breeds:

These are the 4 most widely accepted Pitbull type dogs. However, some breeds are only accepted by certain kennel clubs, and some are accepted by all Kennel Clubs, making it a little more confusing. All four Pitbull type dogs share their muscular and athletic look, they all have a square-shaped heads, squared nose and almond shaped eyes. They have long, straight tails and their ears are often rose shaped. Their coats are short and smooth and require minimal bathing and brushing and come in most any color.

They have a wonderful temperament, often adoring their humans and craving their attention and company.  They are eager to please their person which makes them very easy to work with and train from a young age. They are very sensitive and sweet souls and are known to be particularly fond of children. They been referred to as “The Nanny Dog”. If properly socialized they tend to do well with other dogs and are quite sociable. As with any dog if they are not properly socialized as a puppy, they can display fear aggression with other dogs.

The American Pitbull Terrier is the most common. It is often thought of as the original Pitbull type dog and has several bloodlines including the Colby Pincher or Colby Pit Bulls, and the Old family red nose. This breed is not recognized by the AKC (American Kennel Club) but is however recognized by the UKC (United Kennel Club) and considered to be a purebred dog by the UKC maintaining its breed type for over 150 years.

The American Pitbull Terrier is often the tallest of the 4 breeds and can come in a variety of colors. Males are typically 18-21 inches in height and between 35-60 lbs. Females are 17-20 inches in height and 30-50 lbs. They are often compared to or mistaken for the American Bulldog, the Staffordshire Terrier and the Dogo Argentino, Bull Terrier, Japanese Tosa and the Dogue de Bordeaux because of their similar looks but they are all different breeds.

The Red Nose and Blue Nose are variations of the American Pit Bull Terrier and are bred to have exactly that. A Red nose has a copper or earthy brown coat (Brown, red, fawn, chestnut) and their lips, eyes and toenails are also red in color.  A Blue nose will have a blue nose, lips, eyes, and toenails will be blue or grey in color. A different color nose is a result of low melanin levels and can create health issues and diseases. It is linked to skin allergies, heart disease, eye conditions and an increased chance of cancer and decreased immune system.

The American Staffordshire Terrier or “AmStaff” is recognized by the AKC but not the UKC. The American Staffordshire Terrier has a very sweet nature and is known for being a family companion. They are stocky, muscular, and often agile. Their coats are short, and they come in a variety of colors, solid, partial, or patched. Males are typically 18-19 inches at shoulders and females are 17-18 inches at shoulder.

The Staffordshire Bull Terrier is recognized by all major Kennel Clubs. They are the smallest of the Pitbull type dogs. They are known for being affectionate, tenacious, very intelligent and brave. They can be a great choice for a household that is smaller due to their size. Typically, males are 14-16 inches height at shoulder and 28-38 pounds. Females are 24-34 pounds and come in a variety of colors.

The American Bully is a descendant of the American Pitbull Terrier but has become so distinct in appearance overtime it is now considered to be its own breed. They were a breed developed in the 1980’s and is recognized by the UKC and The American Bully Kennel Club. The American Bully Kennel Club recognizes them in 4 sizes (Pocket, Standard, Classic and XL) There are also Micro and XXL American bullies, but they are not officially recognized. They are shorter than an APT and wider than any of the other breeds.  They are often compared to American Bulldogs, English Bulldogs and English Bull Terriers. They measure 16-20 inches from paw to shoulder but do not have a set weight. They are considered a medium sized dog that are packing some serious muscle. They have very specific nutrition requirements at all stages of their life to promote their large muscle mass.

Pitbull type dogs tend to form strong bonds with their owners and make wonderful family dogs. They are known to be gentle, silly, playful social butterflies and love being a part of an active household and are often great with children. They are highly intelligent and typically will exceed in obedience work. As with all dogs it is important to socialize them with other animals at an early age and continue to throughout their lifetime. They are active dogs and usually have a high drive for physical activity and a need for mental stimulation.  Running, scent work, pack walks, playing tug, agility, Fly Ball or frisbee and playing with another dog are all great ways to help your Pitbull expend some energy mentally and physically. On the flip side of this they are also known to be attuned to their owners and adjust their attitudes as such being down for a long hike or a nap on the couch.

They are very food motivated and love to chew so it is important to provide them with plenty of strong chew toys. They are short-haired and low shedders; they require less grooming compared to other breeds and only need bathed every 4-6 weeks and a brush with a rubber mitt once a week to remove excess or dead hair. It is important to clip their nails every couple of weeks to prevent cracking or breaking and keep their ears clean and free of wax and dirt to prevent infections.

Because they are so high-energy and muscular, American Pit Bull Terriers tend to need more protein in their diet. They also benefit from lots of Omega-3 and Omega-6 fatty acids to keep their coats glossy and their skin free of the allergies and inflammatory conditions to which they can be prone.

Refer to the individual information on each breed for height and weight.

They typically have a life span of 8-14 years and can be susceptible to a range of health issues.

Origins of the Pitbull

Old English Terriers and Old English Bulldogs were bred together until the mid-19th century to produce a dog that combined the strength and athleticism of the bulldog and the gameness of the terrier. This type of dog was bred in the British Isles and became known as the bull and terrier.  In the UK Bull-and-terriers were used in bull baiting and bear baiting. Bloodsports were outlawed in 1835 in the UK, when Britain introduced animal welfare laws, so “rat-baiting” and dogfighting – which were easier to hide from police – became the new sports of popularity. This continued for decades and took place in small areas of Britain. These dogs arrived in the United States around 1845-1860 were the fighting practice continued, in 1898 the breed was recognized by the UKC and named the American Pit Bull Terrier.

In the early stages of America, many immigrants brought their Pit Bull dogs over as part of their families. Though the dogs were bred for fighting sports, the were also incredibly intelligent and friendly. They were used for a variety of jobs that including being used as “catch dogs” for semi-wild cattle and hogs, and to drive livestock, protecting the family from predators, watching the children, and providing companionship. As the popularity of newspapers and media grew throughout the years, many of these dogs were brought to attention for the number of exemplary deeds they performed and by the early 20th Century they were considered “Americas Dog”.

There have been several Pit Bulls that were famous throughout the 20th century and toted as American heroes. Bud, Sgt. Stubby and Petey of Little Rascals fame to name a few. There were several notable figures throughout history that were avid Pitbull owners and supporters, and they were even used in advertising as a National Mascot during WW1 and WW2 and were some of the first dogs used in American war times.

Around 1987 there was a turning point where the media began portraying them in an unfavorable light and Breed Specific Legislation began to take hold. The media has been sensationalizing stories for quite some time to gain readership, but it has been the dogs who have suffered far more than people have.

Thankfully there are more and more people helping to advocate, educate and getting on board to help Pit bulls and fight for their rights and show them in a better light. BSL is being challenged in many states and many Pit bull’s owners have once again helped them to be seen as the loving dogs they can be who are service animals, certified therapy dogs, work in Search and Rescue, trained to work on police forces, working as educational dogs for Humane Education and the list goes on. They are smart, sensitive, forgiving, charming, silly loving dogs that just need to be given a chance.

FUN FACT: They are not inherently aggressive dogs. In fact, in temperance tests, Pit bulls were the second most tolerant breed behind Golden Retrievers. The least tolerant was the Chihuahua.

FUN FACT: Bud, was a Pitbull who accompanied his owner Horatio Nelson Jackson on the first cross–country road trip in 1903. Jackson and his traveling companion found Bud about halfway through their trip, and he gained almost as much attention as his new owner. Bud’s googles are still on display at the National Smithsonian today, and he became the face of The Auto Era in advertising.

FUN FACT: During WWI and WWII, Pit Bulls were used in advertising as a national mascot

FUN FACT: Petey from the Little Rascals was originally played by a show biz dog named Pal (and later his offspring), who was also cast as the live version of cartoon Buster Brown’s dog Tige.

FUN FACT: Pit Bulls were on the cover of Life Magazine three times – more than any other dog.

**ONLY DOGS THAT LIVE IN-JURISDICTION AND LICENSED WITH SLCO ANIMAL SERVICES MAY BE SIGNED UP. SPACE IS LIMITED.

Treats: Get them treats! Looking for a fun way to celebrate or participate? Donate needed goods to the pets in the shelter. You can help dogs by fulfilling items from their Amazon Wishlist! Everything from peanut butter to Kongs! All items purchased will ship directly to the shelter.

Hounds Around Town: Looking for a fun way to celebrate and participate? How about joining our Hounds Around Town Program and getting one of our dogs out of the shelter for the day and on adventure around town to help them get adopted?

Our PUPS need you! Take them out for an adventure and let them be Hounds Around Town. First, you’ll need to complete a quick training and then road trip time. The dogs love going for a walk around the park, getting a puppacino from Bjorn’s Brew, and hanging out with you.

When you’re done, you’ll share pics of their adventure, those will help them get adopted! Email fosters@slco.org for more info!