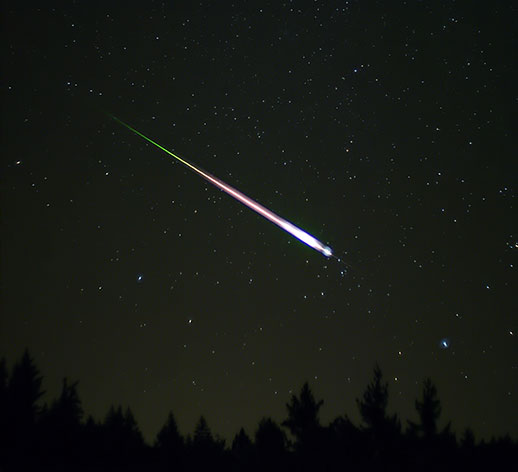 The Leonid meteor shower is expected to peak at 4 p.m. MST on Tuesday, November 17. This meteor shower occurs every year as Earth collides with a stream of dusty debris shed by comet Temple-Tuttle. When these tiny comet particles plow through Earth’s upper atmosphere at high speed, they vaporize in streaks of light that we call “shooting stars” or meteors. An observer with a clear sky away from city lights can expect to see 15 to 20 meteors per hour. Even with fewer meteors than showers like the Perseids or Geminids, this sky show can be impressive as Leonid meteors tend to be bright and leave persistent trails.

Where is the best place to look? Up. While the meteors will appear to originate from the constellation Leo, they can be seen all over the sky. The best time to observe the shower is after midnight when Utah is facing into the meter stream. If you cannot observe during those hours, do not despair, some meteors should still be visible as soon the sky is dark. With the peak on Tuesday afternoon, some meteors should be visible early Tuesday morning. The most important aspect of observing a meteor shower is to be away from city lights. Meteor showers are best seen with the eyes so no equipment is needed to observe. However, a lawn chair and plenty of warm winter clothing will help make the observing session more comfortable.

The Apple, The Moon, and Newton’s Legacy