On the Home Front

In celebration of Utah Archives Month, the Salt Lake County Archives present an online exhibit highlighting the history of Salt Lake County's participation in the war effort during World War 2

When the United States entered World War II the entire nation geared up to participate in the war effort. Like many communities around the United States during World War II, Salt Lake County had an active Civilian Defense Council. This council participated in war bond drives, trained civil defense workers and conducted drills to help these workers and ordinary citizens prepare for the possibility of an attack.

From September 9th to September 30th 1943, Civil Defense leaders and volunteers in Salt Lake County participated in the Third War Loan Drive to help fund World War II. The fund raising goal for the State of Utah was $41 million dollars, half of which was expected to come from Salt Lake County. The War Loan Drive included an extensive publicity campaign, and war bond workers were told to conduct a “house-to-house canvass of your neighborhood.”

The federal government sent the local defense councils extensive publicity material to be used in local newspapers and radio. Some of these materials were editorial cartoons (like the one above), ideas for newspaper stories about service men, and even speeches that might be given to local organizations. The materials included information on how to get specific groups such as farmers, foreign-born Americans and, as the image below illustrates, women involved in buying and selling war bonds. 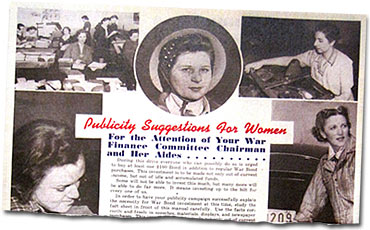 Following the success of the war loan drive Ted R. Gamble, National Director of the War Finance Division for the United States Treasury Department said, “The cooperation of these forces facilitated the greatest person-to-person campaign…that has ever taken place in this country. The sales to individuals alone exceeded by many millions the $5 billion goal – a goal which prior to the drive was considered so ambitious as to be frightening…This type of activity is a natural for the state and local defense councils and their auxiliary agencies.”

One important aspect of civil defense work was preparing communities for potential air raids. On August 19, 1943, from 7:00 to 9:00 pm, an elaborate air raid drill was conducted in Salt Lake City and County. Air Raid Wardens and Civil Defense Zone commanders were given instructions in advance and told to be ready to retrieve the “simulated bombs" and act out the incidents listed on the streamers. 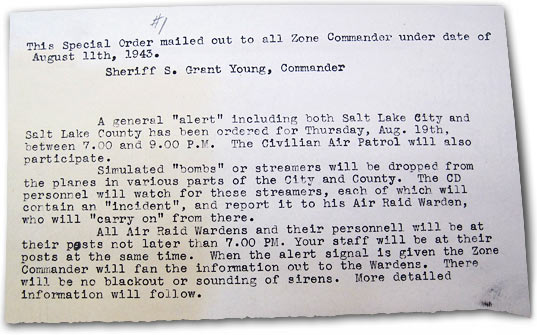 Sixteen planes participated in the air raid drill, dropping 800 streamers in total. Six hundred of the bombs fell in Salt Lake City with another 200 “incidents” dropped on the County; of the 200 dropped in the County 107 were recovered. Thirty-six incidents were “red” incidents which required auxiliary services, such as fire and police, to be brought in. The “red incident” illustrated below was a simulated cluster of 6 incendiary bombs. 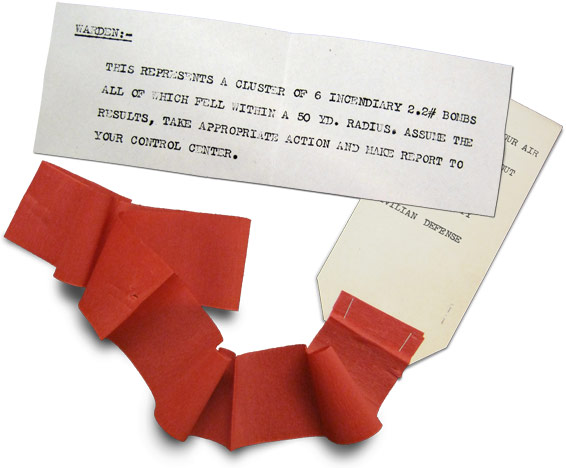 Air Raid Wardens were given a variety of hypothetical emergencies to deal with, including mustard gas bombs, the emergency landing of enemy bombers, and the destruction of buildings. The photo below featured in The Deseret News shows “victims” being treated by civil defense workers, who were also members of the ski patrol.

Zone commanders were required to report back to the County as to how their zone had handled the drill. Bingham Canyon Civil Defense Commander S. Jaques said that “15 incidents were reported with very good success. An exceptional large percent of the various units participated and a very high average of attendance was noted.” Below is a report from a commander in Magna who reported that they recovered six of the “bombs”. 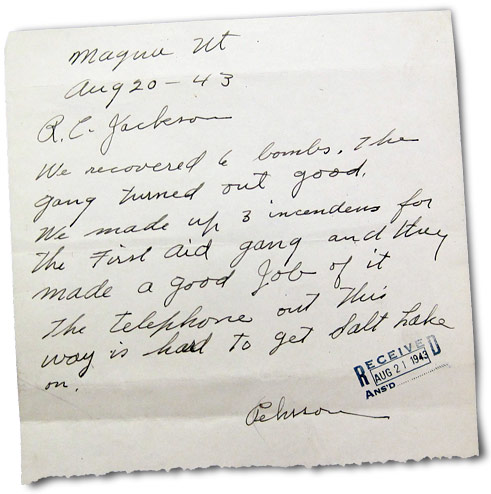 After the drill, Commissioner Morgan, Sheriff Young and Colonel Johnson made a survey of the county reported that “everyone was on their toes and doing a fine job under the conditions.”

A Humorous Look at Civil Defense

This document, found amongst the records of the Salt Lake County Civilian Defense Council, demonstrates that one way civil defense workers combated the stress of wartime was with a healthy dose of humor.