The Draw At Sugar House 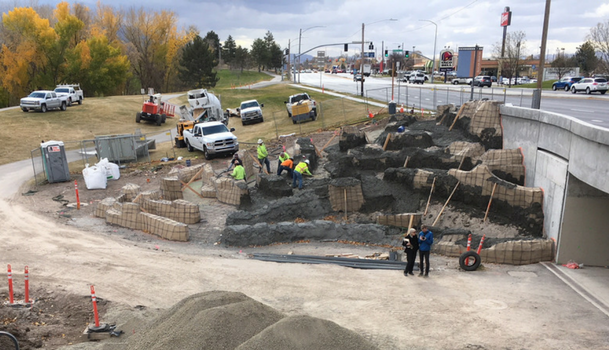 In 2003, the National Endowment for the Arts sponsored a competition to design a pedestrian corridor under 1300 East at Sugar House Park.  Internationally renowned environmental artist, Patricia Johanson, and landscape architect, Steve Gilbert won this competition and have designed what is now known as “The Draw at Sugar House.”

“The Draw at Sugar House” is a design that combines engineering, sculpture, landscaping, flood control, wildlife habitat, and outdoor classroom into one structure. The Draw allows floodwater that over-tops the detention basin in Sugar House Park to flow under an eight-lane highway and drain safely into Parley’s Creek in Hidden Hollow. In addition, the pedestrian tunnel, retaining walls, and flood control elements are sculptural features that evoke the historical journey of 19th century pioneers into Salt Lake Valley.

There are two major sculptural elements in this project. On the west side of 1300 East is a paved, sunken “slot canyon” between tall retaining walls that was inspired by one of the most famous landscapes in American history — Echo Canyon — a natural conduit through the mountains, used for thousands of years by wildlife and Native Americans migrating between the Rockies and the Great Basin. This armored “canyon” incorporates Parley’s Trail, food, habitat and water for wildlife, an historical narrative, and the floodwalls and spillway for a dam that conveys floodwater to Parley’s Creek in Hidden Hollow.  This portion of The Draw was completed in 2014. 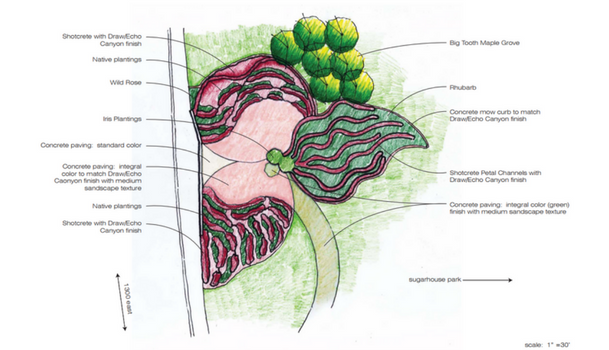 The Sego Lily Plaza is the focal point of The Draw at Sugar House.  On the east side of the 1300 East, a sculptural “Sego Lily” will rise more than 30 feet above grassy berms along the edge of Sugar House Park.  The Sego Lily, with its central plaza, and sculpted shotcrete petals (floodwalls) provides a controlled path for catastrophic floods, channeling the water under the highway and down Echo Canyon into Parley’s Creek.  Salt Lake County, Salt Lake City, and PRATT Coalition contributed to funds for the project.