Search
Notice: NOTICE OF FEE INCREASE FOR RECORDS OF SURVEY: On August 1st, 2021 the fee for filing a Record of Survey increased to $40.00 per sheet. NOTICE: The fees for Monument Permits have changed. Utah Code 17-23-14 modifies the permit fees for existing Monuments and allowed the County to enact an ordinance (SLCo Ord 14.17) to further define process and establish civil penalties for failure to comply with the code. Fees for new monument installation remain the same. For all existing monuments within 30 feet of any planned construction activities (to include road construction or reconstruction, mill and overlay, utility work or construction, etc.) the fee is $400 per monument. Upon completion of said construction activities the contractor shall give notice to the Salt Lake County Surveyor’s Office that work is complete. The Salt Lake County Surveyor’s Office will inspect the affected monuments to determine any refund amount up to $250. *Please see the Monument Permit sections of our website for more information. The Government Center, including the Surveyor’s Office, is now fully open and operational. Please note that due to ongoing COVID_19 guidelines masks are required for everyone visiting the Government Center, regardless of vaccination status.

Originally proposed by Thomas Jefferson, the PLSS began shortly after the Revolutionary War, when the Federal government became responsible for large areas west of the thirteen original colonies. The government wished both to distribute land to Revolutionary War soldiers in reward for their service, as well as to sell land as a way of raising money for the nation. Before this could happen, the land needed to be surveyed. 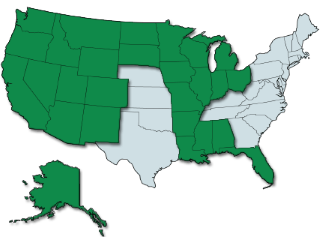 The Land Ordinance of 1785 which provided for the systematic survey and monumentation of public domain lands, and the Northwest Ordinance of 1787 which established a rectangular survey system designed to facilitate the transfer of Federal lands to private citizens, were the beginning of the PLSS. Under Congressional mandate, cadastral surveys (surveys of the boundaries of land parcels) of public lands were undertaken to create parcels suitable for disposal by the Government. The extension of the rectangular system of surveys over the public domain has been in progress since 1785, and, where it applies, the PLSS forms the basis for most land transfers and ownership today. The Manual of Instructions for the Survey of the Public Lands Of The United States, 1973 documents current official procedures for PLSS surveys.

Certain lands were excluded from the public domain and were not subject to survey and disposal. These lands include the beds of navigable bodies of water, national installations such as military reservations and national parks, and areas such as land grants that had already passed to private ownership prior to subdivision by the Government. France, Spain, and Mexico all conferred land grants in territory they claimed; many of these grants were confirmed by the U.S Government when the territory in which they were situated was acquired by the United States, and the land was then excluded from the public domain. 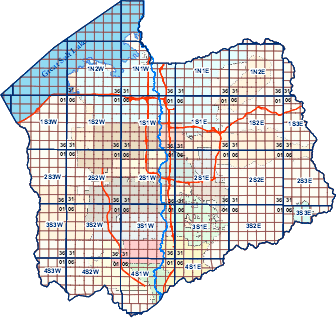 The base of beginning for the PLSS in Utah is called the Salt Lake Base and Meridian. This point, which today is marked with a large stone monument, is located at the corner of Main Street and South Temple in downtown Salt Lake City. On August 3, 1847, Orson Pratt, who was assisted by Henry G. Sherwood, fixed this point, given the coordinates of Latitude 40°26'04", Longitude 111°54'00", and Altitude 4327.27 Feet when beginning the original survey of "Great Salt Lake City," around the Mormon Temple site designated by Brigham Young July 23, 1847. The city streets were named and numbered from this point. David H. Burr, 1st U.S. Surveyor-General of Utah, located here in August 1855, adopted this as the Initial Point of Public Land Surveys in Utah, and set the stone monument, still preserved in position. An astronomical station, its stone base still standing 100 feet North and 50 feet West of this corner was established by George W. Dean, of the U.S.C.& G. Survey, September 30, 1869, to determine the true latitude and longitude. It was used to obtain the correct time at this point until December 30, 1897.