Search
Notice: NOTICE OF FEE INCREASE FOR RECORDS OF SURVEY On August 1st, the fee for filing a Record of Survey will increase from $20.00 to $40.00 per sheet. NOTICE: The fees for Monument Permits have changed. The passing of the new legislative bill SB 104 has modified the permit fees for existing Monuments. Fees for new monument installation remain the same. Fees for existing Monuments have changed. For all existing monuments within 30 feet of any planned construction activities (to include road construction or reconstruction, mill and overlay, utility work or construction, etc.) the fee is $400 per monument. Upon completion of said construction activities the contractor shall give notice to the Salt Lake County Surveyor’s Office that work is complete. The Salt Lake County Surveyor’s Office will inspect the affected monuments to determine any refund amount up to $250. Please see the Monument Permit sections of our website for more information. The Government Center, including the Surveyor’s Office, is now fully open and operational. Please note that due to ongoing COVID_19 guidelines masks are required for those who are not fully vaccinated.

What Is The Public Lands Survey System

The Public Land Survey System (PLSS) is a way of subdividing and describing land in the United States. All lands in the public domain are subject to subdivision by this rectangular system of surveys, which is regulated by the U.S. Department of the Interior, Bureau of Land Management (BLM).

The PLSS is used to divide public domain lands, which are lands owned by the Federal government for the benefit of the citizens of the United States.

The original public domain included the land ceded to the Federal Government by the thirteen original States, supplemented with acquisitions from native Indians and foreign powers. It encompasses major portions of the land area of 30 southern and western States. Since the original PLSS surveys were completed, much of the land that was originally part of the public domain has been transferred to private ownership and in some areas the PLSS has been extended, following similar rules of division, into non-public domain areas.

For areas that were once part of the public domain, legal land descriptions are usually written in terms of PLSS descriptions. Learn more. 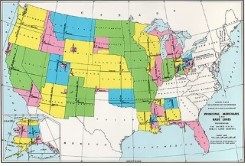 The PLSS typically divides land into 6-mile-square townships. Townships are subdivided into 36 one-mile- square sections. Sections can be further subdivided into quarter sections, quarter-quarter sections, or irregular government lots. Normally, a permanent monument, or marker, is placed at each section corner. Monuments are also placed at quarter-section corners and at other important points, such as the corners of government lots. Today permanent monuments are usually inscribed tablets set on iron rods or in concrete. The original PLSS surveys were often marked by wooden stakes or posts, marked trees, pits, or piles of rock, or other less-permanent markers. 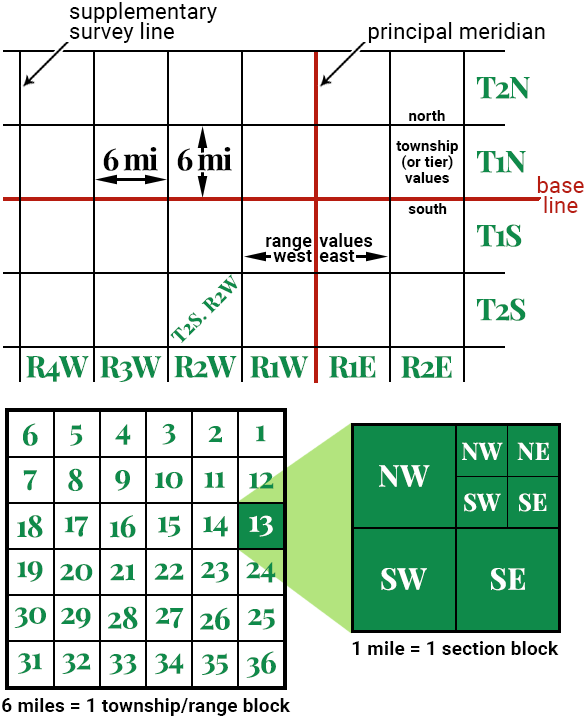 Each township is identified with a township and range designation. Township designations indicate the location north or south of the baseline, and range designations indicate the location east or west of the Principal Meridian. For example, a township might be identified as Township 7 North, Range 2 West, which would mean that it was in the 7th tier of townships north of a baseline, and in the 2nd column of townships west of a baseline. A legal land description of a section includes the State, Principal Meridian name, Township and Range designations with directions, and the section number.