“I must study politics and war that my sons may have liberty to study mathematics and philosophy. My sons ought to study mathematics and philosophy, geography, natural history, naval architecture, navigation, commerce, and agriculture, in order to give their children a right to study painting, poetry, music, architecture, statuary, tapestry, and porcelain.” 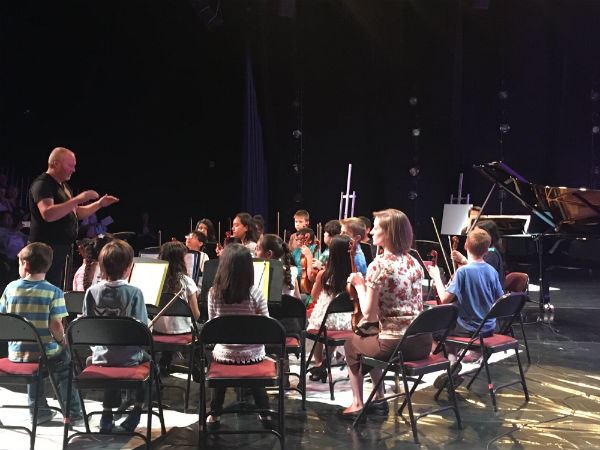 I come from a family of immigrants.

My aunts and uncles can tell me what the ports they left from in Calabria, Italy or Colon, Panama or Havana, Cuba smelled like – preserving details and turning them to folklore is a family pastime. Once they passed through Ellis Island, they assumed their new “Americanized” last names and took every path toward assimilation possible – including banning the speaking of any language other than English for the generations who would be lucky enough to be born in the new land of promise. Their sacrifices were numerous and have reaped cumulative rewards. I stand as evidence that their hard work and harder decisions have a positive impact.

This story is generations old for my family. But, everyday it plays out anew for those who have arrived more recently and are navigating the rigorous landscape of maximizing their experience for the benefit of the generations that will come after. These families comprise a large number of those served by the Salty Cricket Composers Collective’s educational outreach program, GraceNotes. 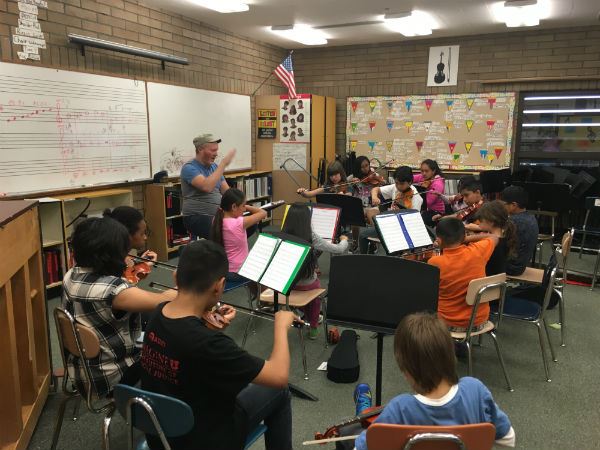 Based at Jackson Elementary School in the Fairpark community west of downtown Salt Lake City, GraceNotes uses the El Sistema model to promote positive social change and empowerment through rigorous, high quality music education. There are several distinctions about an El Sistema model, which can be found at the El Sistema USA website – but the main points are that we use the orchestra from the very first day as a microcosm of society in order to help participants learn the importance of the pursuit of individual and corporate excellence; we are seeking to create empowered citizens, rather than just skillful performers through intensive and comprehensive musical and character training; we aim to use music and its power in communities’ lives to create a richer, more powerful experience for families and children alike by fostering significant cross cultural exchange, instead of merely token exchanges. And, after completing our pilot program, we can affirm wholeheartedly: IT WORKS!

The Story of S

Take for instance the case of a boy we’ll simply call “S.” S had a reputation when his mother signed him up for our program. He had been known to throw classroom furniture when frustrated. His mother’s motivation when she signed him up was simply trying to avoid the many negative possibilities that exist for angry young people with unsupervised hours. His motivation for attending was keeping his parents off his back at home. No matter the case, the first 4.5 months was hard for everyone. S was an obstructionist during our program, his mother was disconnected, and our teaching staff was at their wits' end trying to figure out how to motivate S while meeting the needs of our other students in the classroom. 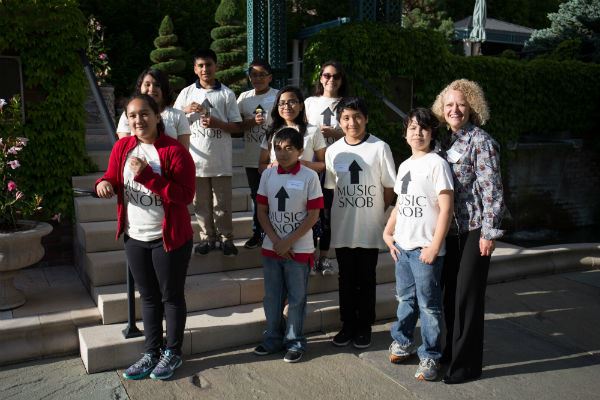 One day, in a desperate attempt to make this arrangement work, I offered S a position in our advanced ensemble, enumerating the new responsibilities that would come along with that offer. Lo and behold, the offering of something to him that he had not earned, but was being freely given to him eventually proved to be a turning point. S took seriously his responsibility within our program, practiced above and beyond what was expected, improved classroom behavior, and aimed to live up to our programmatic expectations.

Of course, generally these sorts of changes don't happen easily. Over spring break, S went missing. His panicked parents contacted my husband and I at 9 pm, asking for his last known whereabouts and eagerly accepting our offers to canvas the neighborhood for him.  As I walked with S’s mother and another mother from our program, I learned that S had spent time in Guatemala with an aunt, waiting for his family to bring him and his 7 brothers to the US. During that time, he had already been recruited by a cartel – at the age of 8. Since his arrival in the US, S had been lashing out in anger, refusing to communicate, and demonstrating a terrifying level of apathy towards his family. His mother had consulted counselors, teachers, and a variety of professionals, to no avail.

During our 900th lap of the darkened west side streets, S appeared at home. When the search party ran to see him and find out where he had been, we found a defiant young man, unwilling to share any information. I reached out to him, telling him how much his presence means to me and to his peers and that he has a value that cannot be communicated. He shed one tear from each eye, and leaned in to hug me. His mother reports it was the first sign of emotion and connection she had seen from him in 3 years. 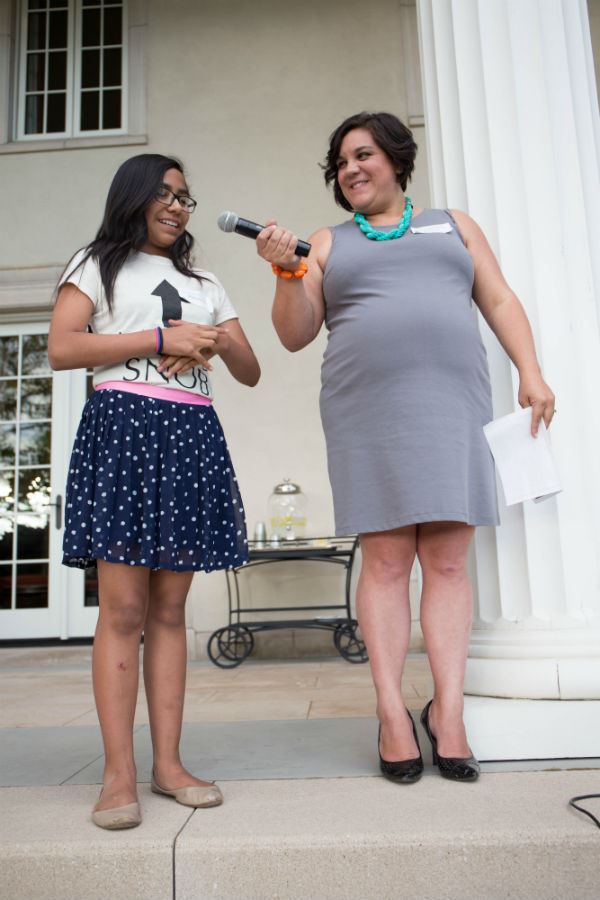 Over the final 2 months of the pilot program, S improved exponentially in all ways possible. He went on to become a true leader in the program. He would stay late to put away music stands and instruments. He asked the violin teaching artist for extra time with her so he could learn quicker. He “won” our first ever “blind audition” for a solo. He showed up at my house on holidays so he could practice with us. He reportedly became a more engaged student during the school day – he even earned honor roll his last quarter.

S is now ready to move on to middle school. He’s already planning his route home, so that he can stop in and participate in any way possible with us at Jackson during the school year. He’s also taken the initiative to start his musical career at his new school during their summer program. His mother called me today to verify that the reason he woke up and got out of the house earlier than anyone else was because he came to our summer program. She keeps me in her phone and knows she’s not alone in her pursuit to help her son build a future for himself. 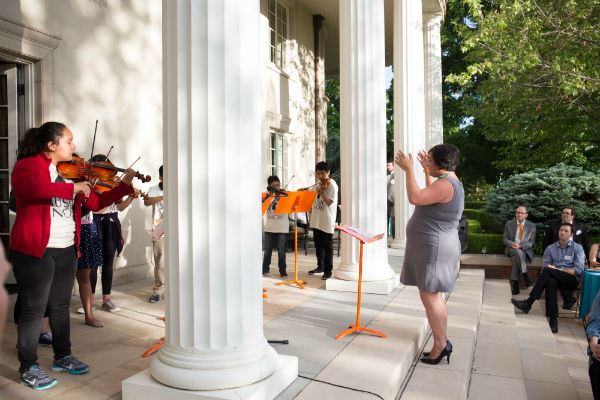 It is a special and humbling experience to see the power of music impacting lives and helping preserve that most American of dreams: that those who come here seeking an empowered future for generations to come are able to accomplish it. While John Adams envisioned at least 3 generations before music would be on the horizon, we’re skipping ahead a bit. We are using music as a means of helping families – particularly those who have arrived here recently – achieve futures that are empowered and prosperous. And, the story of S is just the tip of the iceberg – we’ve got other stories that pack as much punch. We can’t wait to see how the growth of our program continues to spell the growth of opportunities for these young people, and fulfill the visions of those who sacrifice for them!

Victoria Petro-Eschler is the Executive Director of the Salty Cricket Composers Collective. She is devoted to the ideal of using music as a powerful influence in the life of her community and giving voice to the voiceless – a mission instilled in her by her background in music therapy, musicology, and nonprofit management. Victoria is proud to be a part of the vibrant Salt Lake community and is enthusiastic about the possibilities presented for the future through high quality arts education.