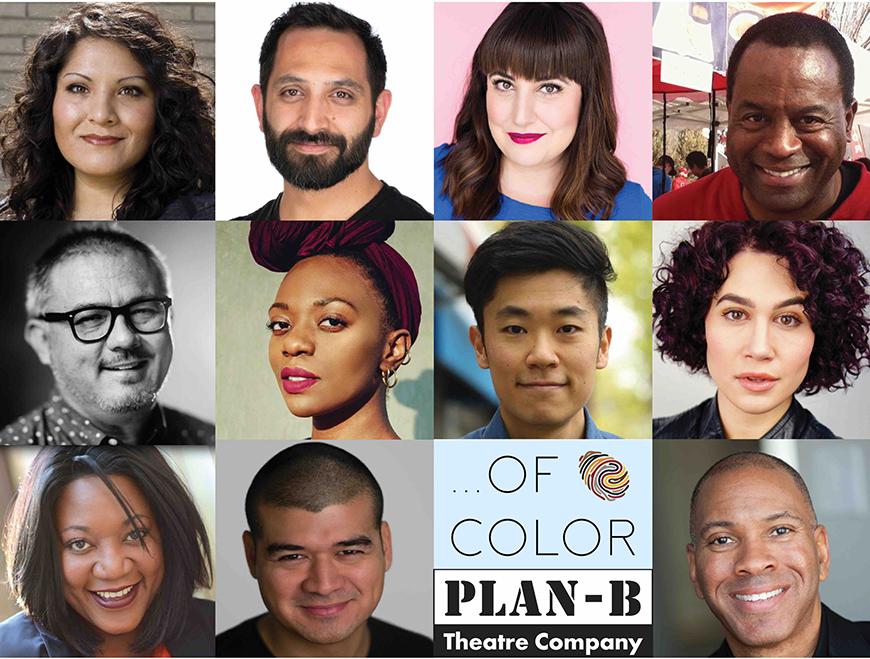 …OF COLOR is unlike anything ever undertaken in the history of Utah theatre. It’s the world premiere of four short plays by four Utah playwrights of color – each making their playwriting debut – and includes Utah’s first world premieres by Latina and Persian playwrights.

I am not a politician, and I have never been able to articulate or debate politics in any way. I went through a torrent of emotions as I watched Donald Trump attack groups of people and brag about his sexual predatory behavior during his campaign but I naively believed that we would never allow this man to preside over our country.

My disappointment, anger, and sadness were far too large to measure and simply get over as some would suggest. I found myself posting everything anti-Trump that I could post on social media. In the process, I discovered that people who I knew, went to church with and even admired were supportive and defensive of this individual.

As a person of color, I didn’t think I could write a play about white racists, but white people write about people of color all the time, and not always in a good light. So I took what I saw and created “American Pride.” It was a way for me to work through my emotions surrounding our current political state.

As an immigrant female in America, I felt welcomed and empowered when I became an American citizen but now I find myself concerned and can feel powerless. I’d like to believe we haven’t given up, that we have something that still empowers us or that we are working to find something that does. For me, theatre has been just that, whether I am behind the scenes or sitting in the audience watching life played out on the stage.

“American Pride” has been, for me, one way to cope. As playwrights of color, we have all come together and voiced ourselves through these plays. I hope that as you see this production you will cry a little, laugh often, get a glimpse of who we are as people of color, and most importantly, of who you are. This production is just the beginning. Great things will come as Artists of Color continue to unite and do what we are doing with …OF COLOR. I believe theatre is that powerful; we make it that powerful.

Persian/Japanese playwright Bijan Hosseini, author of “The Frailest Thing,” a drama about the difference between wanting to live and not wanting to die.

A mirror is a hell of a thing.

I have no idea what I’m doing. Several people much smarter than me who do have all told me that this is okay.
I [almost] believe them, intellectually.
Emotionally … not so much.
– Not yet anyway.
This experience has been a thing, like a gun to my head, that graciously forced me to do the thing I want to do but haven’t often done – write.

I’ve been led through a process that bled me open and made me look at other processes inside: What’s in my control and what’s not? What do I want to hang on to, and what do I need? What can I let go of, and what can’t I? What do I have to let go of, and how long do I have to be dragged before I finally let go?
I still don’t know.
I don’t have any answers.
– Not yet anyway.
The play, for me, roots this universal existential angst about which one can become mired in intellectualization and puts it into a painful present with very little, if any, control – it puts the gun to the head and forces the reality not of thoughts, but feeling.

African American playwright Darryl Stamp is the author of “Roar.” a dramedy about stand-up comedy.

“Roar” comes from my personal experience as an amateur and professional stand-up comedian. As a two-time winner of Showtime’s Funniest Person in Kansas in the 1980’s, I competed against Ellen DeGeneres, who was named Funniest Person in America. I’ve experienced what it’s like to perform at various open mic nights, to fundraisers with hundreds of people in the audience, to opening for and working with other professional stand-up comedians. I’ve performed at the Santa Monica Improv, Charm City in Baltimore, the Comedy Cellar in New York City and various comedy clubs in Kansas, Missouri, and Louisiana.

The stand-up comedy writing process, the stress associated with entertaining audiences despite what’s going on in your personal life, and the exhilarating feeling you get when you hear audiences laugh is the inspiration for “Roar.”

Most comedic material is the expression of moments that run the gamut of experiences and emotions. Like Richard Pryor ‘s routine about catching himself on fire while freebasing cocaine (“… Save the balls! …”) to Robin Williams “Childbirth” (“… It’s like Winston Churchill and Gandhi had a baby …”), they’re all scripted, worked, amended, rehearsed, performed, and reworked in their earliest stages.

I’ve always believed in writing things down as soon as possible if I’ve experienced something funny or had an epiphany. It’s not unusual for me to get out of bed to write something down that could become material for a stand-up “bit,” or a moment within a moment in a scene in a play.

It’s only natural that the intersection of race, gender, family and culture would be explored in plays about people of color, written by people of color. “Roar” reminds us that the past is inescapable and that hope, forgiveness, and justice for all is needed to heal.

Latina playwright Olivia Custodio is the author of “Drivers License, Please,” a dark comedy about bagels, rental cars and rednecks.

As an actor, I usually feel pretty confident when I walk out onto a stage and give a performance. But watching my play onstage?! Welcome to Insecurityville, population: me! It is a very strange thing to write words from your heart and know that people are going to hear them. It’s as though someone else gets to read your diary to a crowd and you have zero power to control how it goes. Personally, I think writing a play is far scarier than being an actor. I still can’t even use the word ‘playwright’ to describe myself.

I was inspired to write “Driver’s License, Please” because of how I was treated by a roomful of men at a car rental agency. The way I had to pretend to know a lot about cars and insurance so that they wouldn’t take advantage of me. The way I had to ignore the fact that the redneck guy next to me was staring at my body the entire time. “Driver’s License, Please” is a metaphor for the state of our union, dramatized to the highest degree, and yet perhaps not too far off.

Writing “Drivers License, Please” has taught me a lot about myself, which isn’t something that I necessarily thought would happen during the process of creating a short play. It has taught me that yes, I do actually know what I’m doing and I have to trust it. I have to be okay with the fact that it will never be perfect and sometimes, as Julie Jensen says, you need to “just write the damn thing!” That other opinions matter, but ultimately I get to tell my story the way I want to. Sure, it may not be everyone’s cup of tea, but neither was the awkward and crunchy afro that I sported freshman year of college, and hey, I survived that too.

…OF COLOR receives its world premiere at Plan-B Theatre March 28-April 7. Details and tickets at planbtheatre.org.