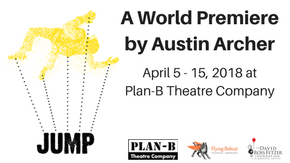 Austin Archer’s play JUMP receives its world premiere at Plan-B Theatre Company April 5-15, 2018 in a co-production with Flying Bobcat Theatrical Laboratory.
Austin, along with co-directors Alexandra Harbold and Robert Scott Smith, share their thoughts on the play and co-production. “I’ve been writing songs for over a decade ( visit Austin's music catalog). It started slowly when I was in high school. I’d finish a song every few months or so, and I was never pleased with the result. I wanted to be a great songwriter like Bob Dylan or Elliot Smith. I believed that if I kept it up I’d eventually get better at it. And while that was true, I thought I’d get better after ten or twenty songs. In reality, I don’t think I started to get decent until I’d written maybe 100. By then I was in college and finishing a new song about every other week. I’d adjusted my methods, I’d grown as a guitarist and lyricist, but I still wasn’t where I wanted to be. As time passed, my obsession grew deeper. I’d write song after song, most of them only lasting in my mind for a few days. Many would never even be committed to paper, let alone memory. I’d developed a particular vision for what I was looking for, and I knew it when I had it. So, when it was right, the song got recorded on a tape recorder, written down, practiced, and refined. When it was wrong, it was simply released into the ether from whence it came without a second thought. I had no patience for the bad songs. In my mind, I had to push through the bad ones in order to get to the decent ones, and I had to slog through the decent ones if I ever wanted to find the elusive great ones.

If you’re still reading this, I’m sure you’re wondering when I’m going to find my way out of this overly long metaphor and get to the point.

JUMP was only the fifth full-length play I’d ever written when I submitted it to Plan-B through The David Ross Fetzer Foundation for Emerging Artists [with whom Plan-B collaborates to produce a new work each season by a playwright age 35 or younger]. I have enough taste to know that it wasn’t at the level I would’ve liked, but there was a deadline, and I had an idea that I liked, so I submitted the equivalent of a song that probably never would have seen the light of day. But here’s what writing plays has taught me about songwriting: first drafts can be improved upon! In songwriting it’s easy to spend a day on a song, realize it’s not going anywhere, and toss it. It’s easy to be impatient. But if you spend several weeks, months, or possibly even years on a play or a book only to find out that it isn’t up to snuff, it’s a lot harder to just put it in the trash.

So, I’ve been looking at JUMP like a very long, narrative song. One that starts with a compelling idea: a melody that has legs. In this case the idea was simple: what would happen if I dramatized the conversation between a first-time skydiver and his instructor as they realized the chute had malfunctioned and they’d both be dead in a matter of minutes? If a three-second car wreck can feel like ten minutes of slow motion, playing out in agonizing detail, then surely a three-minute free-fall could fill the space of a 70-minute play (and who wouldn’t want to see a live skydive staged, am I right?). What I found: not only was it hard to fill the space of a full narrative with a single moment, it was also possibly ill-advised. My first draft lacked individual characters and story and that’s because my focus was more on the idea than the actual play. In my mind nothing in the play was really happening, it was all part of some pre-death fever dream so who cared if the characters were two-dimensional? It was all about the concept. The style. The challenge. And while I’m still interested in that initial question of whether or not a person’s thoughts during a free-fall to certain death could fill an evening on stage, that’s not the play I wound up writing. I realized that even if I could script those thoughts, they might not be all that dramatically interesting: they might just be random and freeform and chaotic. I have nothing against chaos in art. I think it can be quite beautiful. But JUMP initially unveiled itself to me as a narrative surrounding four characters. I had to figure out what that narrative was outside of the central incident of the failed skydive.

And I honestly had very few ideas.

Luckily, what I did have was time and a group of more experienced playwrights to sound the play in front of. The Lab at Plan-B is such an enormously valuable resource for writers trying to troubleshoot a script. It’s basically the musician’s equivalent of being able to test and workshop each new song in front of Neil Young, Paul Simon, Mariah Carey and Stephen Sondheim (Didn’t know that Mariah wrote all her own songs? Well, now you do. You’re welcome.). It’s amazing. With their insight, I was able to begin the process of fleshing out the characters. I began to work through each character, one at a time, to turn them into people with individual circumstances, arcs and behaviors. Remarkably the story followed right in suit: turns out character and story are kind of joined at the hip. When one suffers, the other suffers, when one improves, the other goes right along with it.

I’m still fine tuning. Still trimming, adding bits and pieces. I’m still allowing the play to continue to reveal itself, note by note, stanza by stanza. But it’s there now. It’s something I can step away from and set free. It’s a song I’d put on an album.

One more thing: former Davey Foundation grant winner Carleton Bluford brought me to tears with his play MAMA at Plan-B a few years before JUMP was selected as the winner of the same competition. It wasn’t just that Bluford is a dear friend and I was beaming with pride, it wasn’t just the beauty of his words and the lovely sentiment he showed for mothers everywhere (I mean it was those things), but the play closed with a song David Fetzer had written for his mother before his death, and that really was the blow that broke my emotional dam. I was moved by the reality of a living legacy for this kind and generous artist taken far too soon. I am so honored to have my play added to that living legacy, and I couldn’t be happier with the approach Plan-B is taking with it. Jerry’s decision to collaborate with Flying Bobcat was a genius move that I believe will really make the play take flight.  Alexandra Harbold and Robert Scott Smith aren’t only friends of mine, they’re also a team I’ve previously worked with to create two devised pieces. We have a knowledge of each other’s artistic vocabulary. I trust their vision and their commitment to finding solutions through imagination and good old-fashioned play. If the few conversations I’ve had with them discussing ideas for the show are any indication, they are going to blow this whole thing wide open and create something bolder and more thrilling than anything I could have done on my own. And hopefully it will be a worthy addition to the legacy of David Fetzer!” 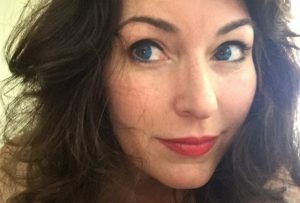 “Connessione. When Robert Scott Smith and I first began devising work together at The Leonardo, we were hunting for inspiration and working methods and happened upon Michael J. Gelb’s How to Think Like Leonardo da Vinci. The da Vinci principles have become a divining stick of sorts, a way for us to navigate and dig deeper into the layers of the work. When Jerry invited us to co-produce Austin’s JUMP, connessione, my totem animal of the principles, lit up strong and bright. Gelb defines connessione as 'a recognition of and appreciation for the interconnectedness of all things and phenomena (systems thinking).' This speaks to this powerful act of collaboration and co-producing work; suddenly, the patterns and possibilities come to the fore. Disparate points become constellations.
JUMP is sinuous and capable of effortless time travel. It stirs up questions of how we metabolize loss and grief, what it means to be yoked into someone else’s experience, interdependent – what it means to take the responsibility/burden/choice to take someone else’s wellbeing upon ourselves – or to step away when that weight becomes unbearable. The contracts of love we keep and break. Our dueling impulses to calculate/mitigate risk while hungering for an experience of absolute transcendence. Connessione.” 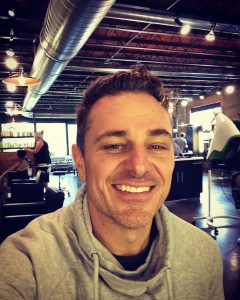 “If you’d asked me five years ago where I’d see my career, I never would have expected to have a theatre company, or that I’d be an assistant professor, or that I would be a successful actor living in SLC. That was not the plan. However, five years ago when I first asked Alexandra Harbold to collaborate with me on the POP-UP@LEO series at The Leonardo, I’d secretly been dreaming of this type of work for what seemed like a lifetime. That invitation led to the creation of three devised original works: SENSES 5, LOVE (our first collaboration with Austin Archer), and MIND|MATTER. This newfound collaboration stirred up our curiosity about forming an ongoing creative partnership and ultimately inspired us to form our own company, Flying Bobcat. Something must be working because once again we find ourselves with another invitation to collaborate. I was thrilled when Jerry approached us to co-produce Austin’s new play JUMP with Plan-B. We jumped at the chance (see what I did there?). Jerry has not only reunited Flying Bobcat with the amazingly talented Austin Archer, he has also given us a platform to share our work with Plan-B’s audience.

Jerry asked me, ‘Why would you want to do this with Plan-B specifically?’ Just look at what they’ve done as a company and you’d have to be insane not to. It’s almost unbelievable to imagine that Plan-B is the only professional theatre company in the country producing full seasons of new works by local playwrights. Artists supporting other artists. This is what David Fetzer was doing all along. With JUMP, it feels like the perfect collaboration of companies working in tandem to give flight to Austin’s play.”