Tanner Humanities in a Nutshell

For over twenty-seven years, the Obert C. and Grace A. Tanner Humanities Center at the University of Utah has promoted humanistic inquiry and exchange by supporting innovative scholarly projects and creating opportunities for interaction among scholars, students, and lifelong learners. In particular, we offer research support, public lectures and programs, and faculty outreach (see www.thc.utah.edu). Our activities reflect a vision of the humanities as not only relevant, timely, stimulating, and cutting-edge, but also essential for developing critical thinking, tolerance, and respect on campus and in our community.

The Tanner Humanities Center is a first-time ZAP recipient and is honored to be counted among the many fine ZAP-funded arts and cultural organizations that enhance Salt Lake County resident and visitor experiences.  To that end, the Tanner Humanities Center was able to use ZAP funds to support a recent free and public event with Pulitzer Prize winning dramatist Suzan-Lori Parks.

A Visit from Suzan-Lori Parks

On Wednesday, February 24, 2016, Parks delivered the 2016 David P. Gardner Lecture in the Humanities and Fine Arts at the University of Utah’s Kingsbury Hall. “The Suzan-Lori Parks Show” was part lecture, part performance, and part “consciousness raising of the collective unconscious.” Parks took the stage for 50 minutes, followed by a Q&A and a book signing co-hosted by The King’s English Book Shop.  Approximately 500 community and campus members attended the event, including students from West High School, playwrights from Salt Lake Acting Company’s Playwrights’ Lab, and undergraduate students from the University of Utah’s MUSE Project, Humanities House, and Department of Theatre. 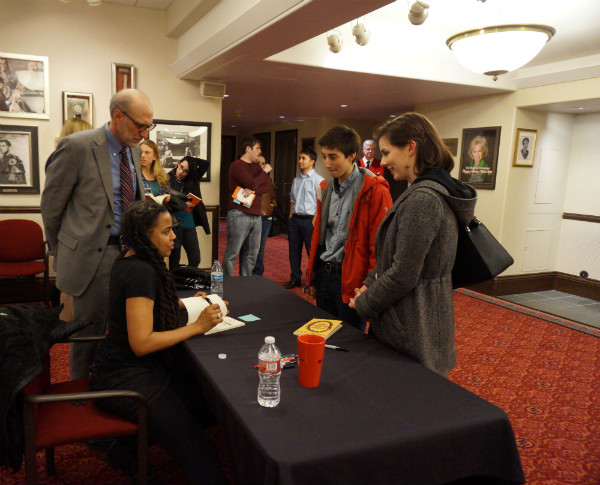 Parks was introduced by Raymond Tymas-Jones, Associate Vice President for the Arts and Dean of the College of Fine Arts, who detailed Parks’ extensive awards and accolades. Parks paused briefly before performing to reflect on the semantic impact of the “U of U.”  Similar to being the “It of It,” she pondered. And this phrase encapsulated her overall message, which she delivered in stories, gestures, song, and what she called “suggestions,” such as “listen to your own voice,” explore your “far out ideas,” “make your own luck,” “practice radical inclusion,” “keep the drama on the stage” and “grow your own grit.” She also spoke about her relationship to her mentor James Baldwin and the importance of trying to commit to her craft every day. When asked about the impact of success, she stressed “holding onto the hands of the people who have come before you,” thinking about “the path you are making for others to follow,” and recognizing that you have been “summoned to spread love, kindness, compassion, and enthusiasm.” 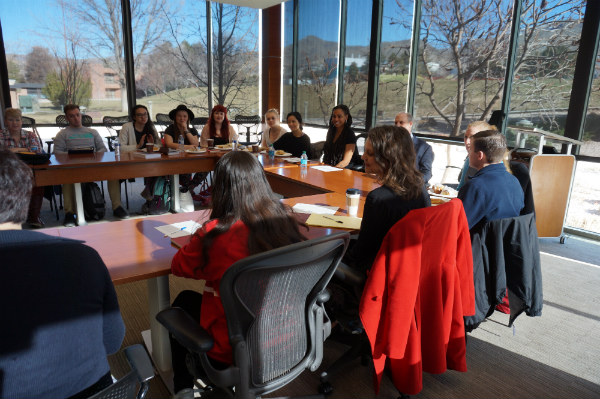 A Workshop with Parks

On the morning of February 25, Parks attended breakfast with University of Utah Department of Theatre faculty and later conducted a workshop for 30 undergraduate students on location at the Tanner Humanities Center. She answered questions about her plays, her creative processes and practices, and the congruency between her written work and her public performances. She also offered advice for saying “yes” to difficulty, risk, and challenge and showing up regularly for one’s creative practices. She closed by inviting participants to join “Watch Me Work,” conversations about creativity and an actual work session that she hosts on the mezzanine of The Public Theater in New York City and via webcast and twitter. 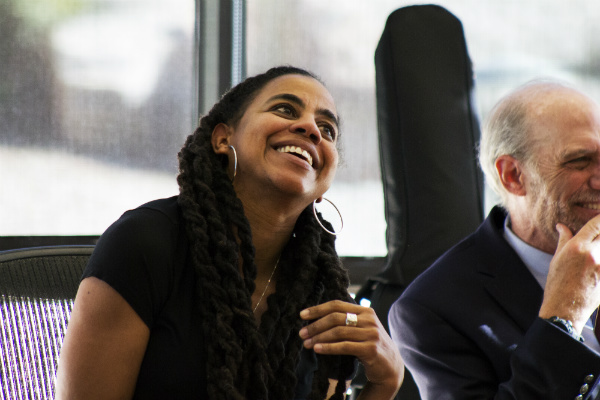 Suzan-Lori Parks is a playwright, screenwriter, novelist, and musician. In 2002, she was the first African-American woman to win the Pulitzer Prize for Drama for Topdog/Underdog. She has been awarded grants by the National Endowment for the Arts, the Rockefeller Foundation, and the Ford Foundation, among others. She has also received a MacArthur Foundation’s “Genius Grant,” was a 2015 Pulitzer Prize-finalist and Tony Award nominee for Father Comes Home from the Wars (Parts 1, 2, 3), and recently was awarded the prestigious Dorothy and Lillian Gish Prize.

Sponsors/partners for this event included:

Susan Anderson, Development Officer for the Tanner Humanities Center, earned her bachelor’s degree in English and Education and her master’s degree in English from Marquette University and received graduate training in English with an emphasis in American Studies and poetry at the University of Utah. She has taught courses in writing and literature and worked as an editor, writer, and grant writer. She also has taught poetry to elementary students in Salt Lake City and currently conducts a book group for Art Access, a local nonprofit arts organization that targets underserved populations. Anderson began working at the Tanner Humanities Center in 2015.