Voters return their mail-in ballots to the Salt Lake County Election Division in one of three ways: 1) through US postal mail, 2) by dropping it in a ballot drop box, 3) or by dropping it off at an in-person vote center. After ballots are collected, they are brought to the Election Center to be processed and counted. 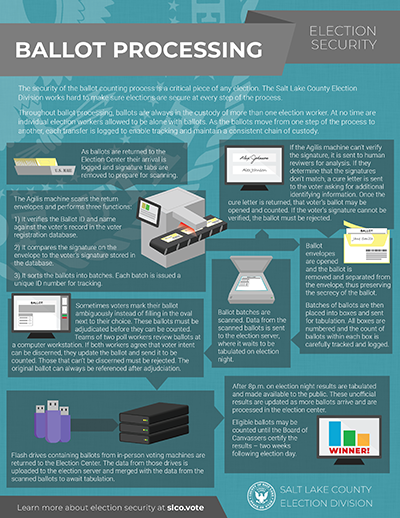 Throughout ballot processing, ballots are always in the custody of more than one election worker. At no time are individual election workers allowed to be alone with ballots. As the ballots move from one step of the process to another, each transfer is logged to maintain a consistent chain of custody.

When ballot envelopes arrive at the Election Center they are logged and immediately placed into trays so their signature tabs can removed and they can be oriented for scanning on the Agilis machine.

First, it checks the Ballot ID against the voter database to verify its validity and see if any ballot with that number has already been returned, or if that voter has voted at an in-person vote center. It also checks that the Ballot ID corresponds to the name and Voter ID on the envelope. If the ballot envelope fails any of these checks, it is rejected.

Second, it scans the signature on the return envelope affidavit and compares it to signatures for that voter stored in the voter database. If the signature matches with a high degree of confidence, it is sent to be opened and counted. If not, it will be reviewed by human reviewers.

Third, the Agilis machine sorts the ballots into batches of 100 based on pre-determined criteria, such as district or municipality. Each batch is issued a unique ID number, so ballots can be tracked as they move through the counting process.

Envelopes that pass the Ballot ID check and signature screening are then sent to be opened. A special machine slices the envelope open, and the ballot is removed by an election worker. At this point, the ballot is separated from any identifying information, thus preserving the secrecy of the ballot.

Batches of ballots are then placed into batch boxes and sent to the tabulation room for scanning. As the ballots move to tabulation, the change of custody is logged.

Each batch of ballots is scanned individually. Data from the scanned ballots is sent to the election server, where it waits to be tabulated on election night.

Some ballots may have ambiguous marks on them, where the voter didn't fill in the oval as instructed. Ballots like this must go through the adjudication process before they can be counted.

Teams of two poll workers adjudicate ballots with ambiguous marks at computer workstations to determine a voter’s intent. If both poll workers agree that the voter’s intent can be discerned, they update the ballot accordingly and send it to be counted. Those with markings that cannot be discerned must be rejected. Ballots with their original markings can always be referenced if needed.

After 8pm on election night, flash drives containing voted ballots from in-person voting machines are returned to the Election Center by teams of police officers. The data from those drives is uploaded to the election server and joins the data from the scanned ballots to await tabulation.

Multiple times on Election Night election results are tabulated and made available for the public to view on the County's website. These unofficial results are updated as more ballots arrive in the Election Center and are processed. All eligible ballots are counted and the results published prior to the review and certification of the results by the Board of Canvassers that has jurisdiction over the election.