The Jordan River drains a 3,805 square mile basin found in North central Utah, and includes Utah Lake and the Provo River. The Great Salt Lake is the eventual recipient of water in the north-flowing Jordan River. The lowest elevation in the watershed, at the outlet to the Great Salt Lake, typically has an elevation of approximately 4,200 feet depending on precipitation and water availability. The basin is bounded on the east by the Wasatch Range and on the west by the Oquirrh Mountains.  The Wasatch Range to the east of the Jordan River has the highest elevations in the Watershed reaching levels over 11,000 feet. The Oquirrh Mountains to the west of the Jordan River, reach elevations of over 9,000 feet. The land surface between these ranges consists of a series of benches, each of which slope gradually away from the mountains and drop sharply to the next bench.

The river meanders for 51 miles flowing north from the outlet of Utah Lake to the Great Salt Lake. Seven major tributary streams (Little Cottonwood Creek, Big Cottonwood Creek, Mill Creek, Parley's Creek, Emigration Creek, Red Butte Creek and City Creek) feed into the river as it flows north to the Great Salt Lake. Notably, each of the Jordan's major tributaries originate in the Wasatch Mountains on the east side of the valley; no major streams originate from the west side of the valley.

Some surface waters in the County flow directly into the lake or filter down to recharge groundwater resources in the basin. The watersheds (or drainage basins) for the Jordan River’s major tributaries are all found in Salt Lake County, and are subwatersheds of the larger Jordan River Basin. 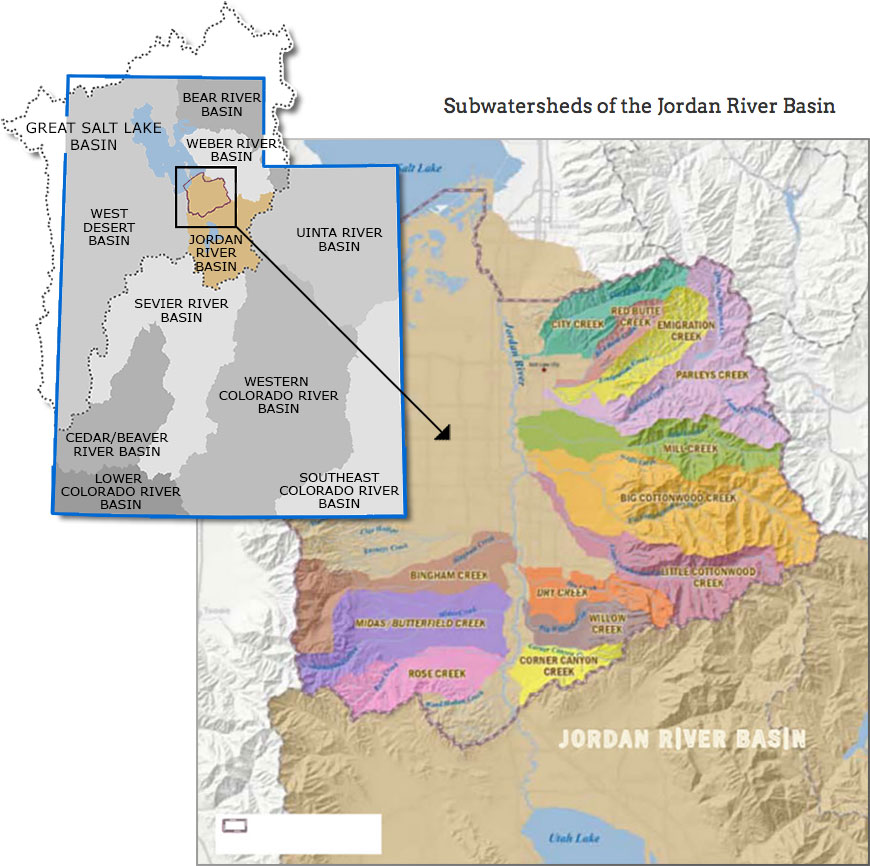 The rugged Wasatch, Oquirrh and Traverse ranges comprise approximately 236,800 acres of land in the Jordan River Basin. With the exceptions of limited portions of Emigration, Big Cottonwood and Little Cottonwood canyons, the mountainous areas are almost entirely uninhabited. Most of the lands in the upper watershed are managed by the U.S. Forest Service, which administers 91,933 acres of national forest lands in the Wasatch Range. In addition, the State of Utah has scattered land holdings of 9,778 acres throughout the watershed and owns the beds of all navigable streams and lakes. Valley bottoms are mostly private lands. Industrial lands are fairly well scattered throughout the valley with the most significant cluster in the northwest. Agricultural lands are located in the southern and southwestern portions of the valley with some irrigated acres in the northwest. Conversion of irrigated agricultural land to residential use, primarily in the southern end of the valley, is the current trend.

Seasonal extreme temperatures in the valley range from -30° F in the winter to 110° F in the summer. Water surface evaporation in the valley averages 42 inches per year. The average frost-free season for the valley area is approximately 200 days and usually occurs between the middle of April and the end of October. As is the case with many western watersheds, annual precipitation totals vary dramatically. As a result of large differences in elevation, average annual precipitation ranges from 12 inches in the lower valleys to 50+ inches in the highest mountain areas. Snow accumulation and melt is a very significant feature in terms of the annual hydrologic cycle for this watershed.

Reduced habitat from channel alterations, low Dissolved Oxygen (DO) levels, and lack of bank cover, have impaired fish populations in the watershed. Stormwater shock loads contribute metals and other toxic chemicals to the riverine systems. Additionally, in-stream flows from Utah Lake are highly erratic and cause channel altering flows as well as de-watering of the River when the compromise level for the Lake has not been reached. The 2004 Total Maximum Daily Load (TMDL) targeted assessment of the Jordan River indicate a severe increase in bacterial concentrations below the confluence with Emigration Creek, Parleys Creek and Red Butte Creek at 1300 South (see Jordan River TMDL section of Water Quality). Due to the existence of over 500 on-site wastewater disposal systems in Emigration Creek and its placement on the State’s 303(d) list, this project will concentrate some resources in the identification and remediation of NPS pollutant sources in the Emigration Creek Sub-Watershed, as it appears this is a major contributor to pollutant load in the larger Jordan River Watershed.

Next
The Amazing Great Salt Lake